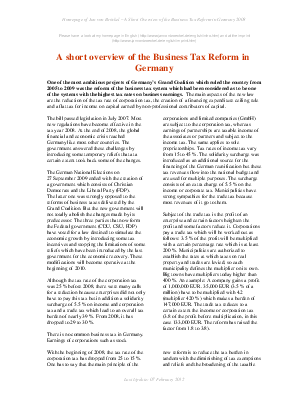 Please have a look at my homepage in English (/english/intro.htm) and at the imprint (/english/imprint.htm)

A short overview of the Business Tax Reform in Germany

One of the most ambitious projects of Germany’s Grand Coalition which ruled the country from 2005 to 2009 was the reform of the business tax system which had been considered as to be one of the systems with the highest tax rates on business earnings.  The main aspects of the new law are the reduction of the tax rate of corporation tax, the creation of a financing expenditure ceiling rule and a flat tax for income on capital earned by non-professional contributors of capital.

The bill passed legislation in July 2007. Most new regulations have become effective in the tax year 2008. At the end of 2008, the global financial and economic crisis reached Germany like most other countries. The government answered these challenges by introducing some temporary reliefs that at a certain extent took back some of the changes.

The German National Elections on 27 September 2009 ended with the creation of a government which consists of Christian Democrats and the Liberal Party (FDP). The latter one was strongly opposed to the reforms of business taxes delivered by the Grand Coalition. But the new government will not totally abolish the changes made by its predecessor. The three parties that now form the Federal government (CDU, CSU, FDP) have voted for a law destined to stimulate the economic growth by introducing some tax incentives and stopping the limitations of some reliefs which have been introduced by the last government for the economic recovery. These modifications will become operative at the beginning of 2010.

Although the tax rate of the corporation tax was 25 % before 2008, there were many calls for a reduction because enterprises did not only have to pay this tax but in addition a solidarity surcharge of 5.5 % on income and corporation tax and a trade tax which lead to an overall tax burden of nearly 39 %. From 2008, it has dropped to 29 to 30 %.

There is no common business tax in Germany.

Earnings of corporations such as stock corporations and limited companies (GmbH) are subject to the corporation tax, whereas earnings of partnerships are taxable income of the associates or partners and subject to the income tax. The same applies to sole proprietorships. Tax rates of income tax vary from 15 to 45 %. The solidarity surcharge was introduced as an additional source for the financing of the German reunification but these tax revenues flow into the national budget and are used for multiple purposes. The surcharge consists of an extra charge of 5.5 % on the income or corporate tax. Municipalities have strong sympathies for the trade tax because most revenues of it go to them.

Subject of the trade tax is the profit of an enterprise and certain factors heighten the profit and some factors reduce it. Corporations pay a trade tax which will be worked out as follows: 3.5 % of the profit will be multiplied with a certain percentage rate which is at least 200 %. Municipalities are authorized to establish the rates at which taxes on real property and trades are levied, so each municipality defines the multiplier on its own. Big towns have multipliers today higher than 400 %. An example: A company gains a profit of 1,000,000 EUR. 35,000 EUR (3.5 % of a million) have to be multiplied with 4.2 (multiplier 420 %) which makes a burden of 147,000 EUR. The trade tax reduces to a certain extent the income or corporation tax (3.8 of the profit before multiplication, in this case 133,000 EUR. The reform has raised the factor from 1.8 to 3.8).

With the beginning of 2008, the tax rate of the corporation tax has dropped from 25 to 15 %. One has to say that the main principle of the new reform is to reduce the tax burden in tandem with the diminishing of tax exemptions and reliefs and the broadening of the taxable base. In the old system, not a few companies were inclined to finance the company by credits from subsidiary companies abroad and to demand the recognition of the interests paid for the credits as expenses allowed for tax purposes or firms transferred earnings to allied companies in another country. It is the aim of the new bill to make Germany more competitive on the international fiscal scene and to keep taxable profits in the country.